Coinbase is the firm behind the crypto currency craze. Its crypto exchange platform wants to take over as the market of the future for cryptos, and its IPO is one of the most anticipated fillings of 2021 considering the surge in Bitcoin prices.

Coinbase is a crypto currency exchange:

Coinbase is a digital currency wallet service that allows traders to buy and sell digital currencies like Bitcoin, and Ethereum. It is at the center of the bitcoin trading surge, and has benefited from recent upswings in Bitcoin demand. They offer investors a digital wallet; its infrastructure is built upon what's called a blockchain (thus the decentralized ledger). The company's goal is ambitious; to create a new open financial system, and become the future of money everywhere. Coinbase enables peer-to-peer exchange of currency all of the world.

How Coinbase makes money, and what it offers:

Coinbase makes money via fees from its brokerage side, nothing innovative there. It also custodians user funds, like a bank, and picks which crypto assets to list on its exchange. Regarding custody; custody provides controls and storage solutions for its institutional investors. It’s geared towards larger players and generates large fees, and has a high account requirement of $10M.

A crypto asset like bitcoin, Ethereum, or Litecoin are mainly obtained through mining.

Mining bitcoin occurs when a computer solves difficult mathematical puzzles and completes 'blocks' by verifying the legitimacy of Bitcoin transactions. The block (from blockchain) is the result from solving these problems. They are immutable, and connected to other blocks that require permission to change.

The miner is sometimes rewarded for her effort and luck of being the first one to arrive at the correct answer of these puzzles. Mining is best done via a network of computers because aggregating computing power increases a miner’s odds of solving these puzzles more quickly.

In order to mine, one needs graphic processing units (GPU, see Nvidia), and application specific integrated circuits (ASIC). Basically, folks use fiat currency to buy bitcoin in the exchange, miners verify the validity of the transaction and some of the miners earn rewards usually in the form of bitcoins by solving the aforementioned puzzles first. 'Blocks' are then added to the blockchain which is the underlying technology behind crypto, and so on and so forth for each transaction.

Coinbase operates an order book and a brokerage both under the Coinbase umbrella. Institutional investors buy crypto assets via the order book, and the brokerage side then allows retail investors to buy and sell crypto assets at mid-market prices which is where Coinbase charges its trading fees. Fees are between 1.5% and 4% for the brokerage, and less for the order book side (though on a greater base is more upfront cash in absolute terms). This structure lets Coinbase stay in control of the flow, and limits liquidity reliance on other parties. A bitcoin transaction usually takes about 10 minutes to process, specifically because of the blockchain protocol, and this mining effort seen above.

Crypto assets are very secure due to the nature of blockchain’s protocol and unlike its rivals, Coinbase has never been hacked. Since its founding in 2012 it has remained unbreached which has improved its reputation as an exchange. Investments and funds are held and secured by Coinbase itself in offline cold storage vaults (because bitcoin can be stored in hardware). Funds held in USD wallets on Coinbase are also covered by the FDIC and insured up to $250,000.

Regulatory bodies have struggled to define, legislate and tax cryptoassets. Bitcoin also has a history of black market activity which has tarnished its reputation as a currency retail investors might want to associate with. However, Coinbase has differentiated itself from competition by spending on licenses and compliance. Coinbase operates differently state-by-state in the US and has also cooperated fully with law enforcement with Know Your Customer and anti-money laundering regulations that banks are also subjected to.

Since it release in 2012, Coinbase has come a long way in terms of its popularity on the App Store, and in 2018 it was first in the top ten app downloaded in the US, a trend that might come back considering the bitcoin surge. Because of Coinbase’s regulatory compliance, users have to submit and verify their identification which reinforces the reputation of Coinbase in the user’s eye and contributes to customer retention rates (a good sign for growth prospects post IPO). Bitcoin was traded a lot more in its most popular time in 2018, but has recently surged up again see graphs below for comparison. Nevertheless, Coinbase through bitcoin has seen a huge increase in customer acquisition. Which one of us has not once pondered: 'should I open an account to buy bitcoin'? 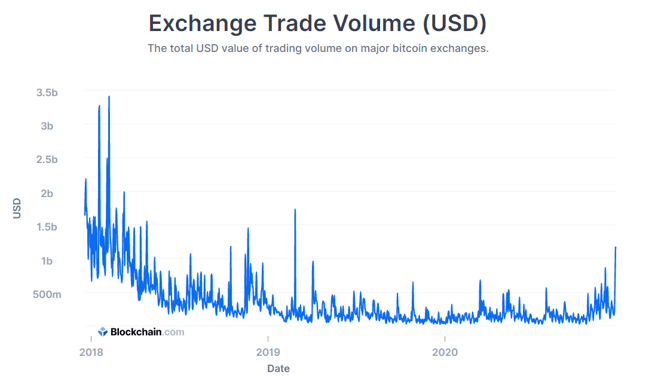 Coinbase’s post-money valuation is around $8 billion. It has raised a total of $547.3M in funding from 10 rounds since 2012. Its last raise, a series-E in 2018, was worth $300M with lead investor Tiger Global Management. Coinbase has also been involved in its own M&A activity, and has invested nine times, three of which as lead investor, (see BLADE and Coinbase CBT). Coinbase has acquired 13 organizations the most recent being Tagomi in May of 2020: Tagomi is a cryptocurrency trading platform which provides clients with better trade executions, executions that increases returns.