SPAC: the end of the bubble ?

The Securities and Exchange Commission (SEC) considers changing some accounting standards that SPAC deals are subject to, potentially putting a temporary brake on deal activity.

Over the past 12 months, SPACs (Special-Purpose Acquisition Companies) have experienced a phenomenal boom across the Atlantic.

As a reminder, a SPAC is a company with no operational activity - an empty shell - that raises funds on the stock market with the sole objective of making one or more acquisitions. It asks investors to sign a blank check with a promise to use the funds raised to acquire an exited yet unlisted company in return.

Once the merger is completed, the SPAC is renamed after the acquired company, which gets its hands on the funds raised. SPACs are therefore "liquid" vehicles for obtaining "pre-IPO" shares in growth companies. They attract billions of dollars from individual investors and hedge funds seeking the high potential gains (and risks) typically seen in private markets.

In 2020, no less than 227 transactions for an amount of $76 billion were recorded. The beginning of 2021 is even more spectacular, with about 20 announcements per week (see graph below). 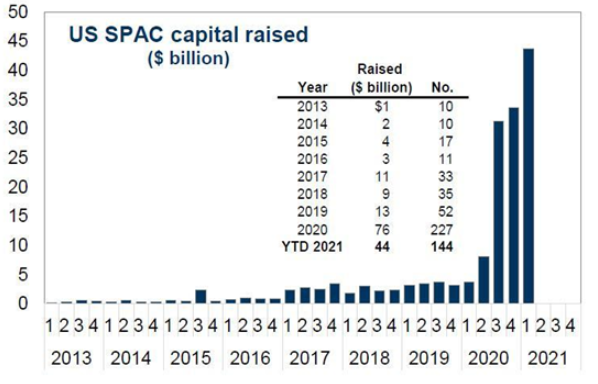 However, a sudden slowdown in new SPAC registrations has been observed since early April. According to the Financial Times, the flood of SPACs has somehow exhausted the funding sources provided by financial institutions. Some analysts point to the woes of Credit Suisse, one of the most active SPAC investment banks. But for others, it is the fear of new regulations that would be at the source of this sudden caution of bankers, lawyers and auditors.

Indeed, the Securities Exchange Commission (SEC) seems to be under pressure, accused by some of letting a new speculative bubble inflate. On April 7th, the SEC issued a first warning, inviting investors not to be trapped by blindly subscribing to certain SPACs, only because they are backed by "star" entrepreneurs or showbiz celebrities.

But the real cold shower came Monday night via a news report by Bloomberg and Forbes magazine. It would now be a matter of revising certain accounting rules on SPACs. But before diving into these new standards and their consequences on the SPAC markets, here are a few reminders.

How a SPAC works

As mentioned above, SPACs exist only to help a private company enter the public markets without going through the traditional IPO route. Within 52 days of the SPAC going public, these units can be "split" into shares and warrants.

As a reminder, a warrant gives you the right - but not the obligation - to buy a share at a certain price within a certain period of time (usually five to seven years). When you exercise a warrant, you buy another share of the company at a predetermined price (usually $11.50 for SPACs).

Once the merger between SPAC and the private company is completed, investors own both the shares and the warrants. The ticker of each will be replaced by the name of the new company (warrants will often have a W added to the ticker).

Getting two separate securities is one of the reasons why investors are attracted to SPACs. See the example below with a SPAC deal with Virgin Galactic.

On August 23, 2017, venture capitalist Chamath Palihapitiya filed with the SEC to create his SPAC under the IPOA ticker. In October 2019, SPAC announced its merger with Virgin Galactic Holdings, Richard Branson's Virgin division that implements commercial spaceflight around the world. At that point, IPOA filed to change its ticker to SPCE. In the months since Virgin Galactic's reverse merger into IPOA, the stock has soared 260%. And the rise in warrants was even more spectacular. At their peak, SPAC warrants were up 1,371%, demonstrating the leverage investors can enjoy. 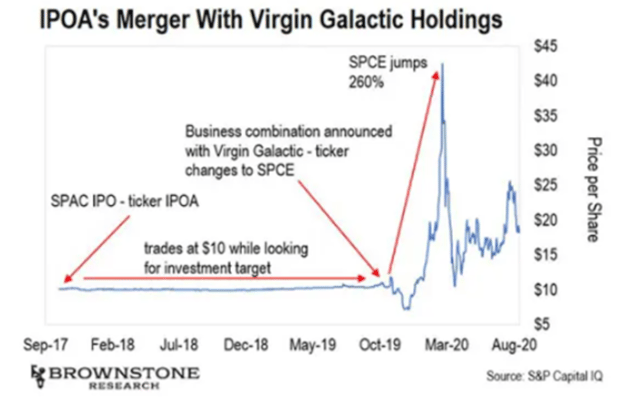 According to Bloomberg and Forbes, the SEC issued a public statement Monday night alerting the market of its concerns about the current accounting used for SPAC warrants and the potential need for issuers to correct their financial statements. While warrants currently appear on the asset side of the balance sheet, they may soon be part of the right side of the balance sheet - i.e. the liability side.

As mentioned above, warrants are one of the main drivers of the speculation around SPACs.

It seems that the SEC is still very vague about how it will treat these warrants. This uncertainty could put a stop to new SPAC projects, as audit firms will not be able to approve financial statements until they receive a clear message from the authorities. This possible change in the accounting treatment of warrants would also mean that SPACs in the process of approval would have to rewrite their financial statements.

But the SEC's decision could have ramifications far beyond the current SPAC "pipeline." Indeed, experts told Forbes that the SEC's new rules could create a panic in the SPAC industry by forcing the hundreds of already listed SPACs to restate and re-register their financial statements. A lot of work ahead for law and audit firms...

Some experts believe that the SEC has intentionally created this confusion in order to temporarily slow down the surge in the SPAC market and thus update the regulation and governance of this type of instrument.

In the long term, Robert Willens, an independent corporate tax expert, says the accounting change could impact earnings and thus create even more volatility in SPACs. Indeed, as a liability, any change in the valuation of a warrant will have to be recognized as income and could therefore have a significant impact on a company's results.

In the short term, the question is whether the potential freeze on new SPACs coming to market will reduce investor enthusiasm for these speculative products or instead create an explosion in demand once SPACs return to the market.

On Tuesday, the SPRQ index (Indxx SPAC & NextGen IPO), which reflects the performance of publicly traded SPACs, was down slightly at the opening. After a strong start to the year, the index has been in sharp decline since the end of January (see chart below).

On the same day, we learned that Grab, the equivalent of Uber in Southeast Asia, is preparing to enter the Nasdaq via SPAC Altimeter Growth Corp for an estimated value of $ 40 billion. The SPAC bubble may not burst today... 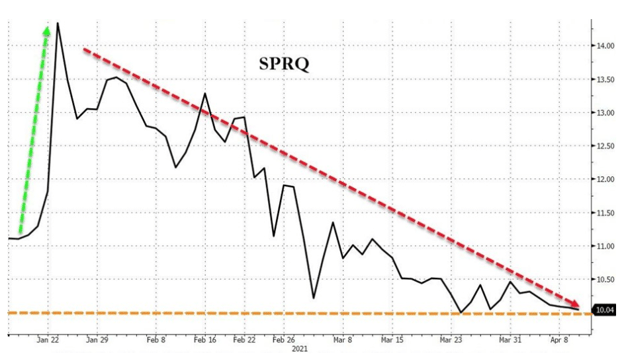