Houston, we have a problem! The velocity of M2 money has plunged to an all time low

A bitter observation: the gigantic injections of liquidity are piling up on banks' balance sheets. With little effect on the real economy.

Money creation is the process by which the money supply of a country or an economic zone is increased. In the modern economy, where money is mostly scriptural (electronic and not linked to a gold standard), money creation is largely driven by commercial banks, via the issuance of credit. This monetary creation is nevertheless controlled and limited by the monetary policy of the central banks and the capital ratios set by the banking supervisory authorities.

The latest quarterly results of US banks were good, even great. But they highlighted a phenomenon that has been growing since the sub-prime crisis in 2008. While the Fed is frantically printing new banknotes and while deposits at commercial banks are exploding, credit growth remains sluggish.

JP Morgan's results are a good example: the largest US bank—historically known for its lending activity—saw its total deposits grow 24% year-on-year to reach a total of $2.3 trillion. At the same time, the total amount of loans issued by the bank was virtually flat compared to the fourth quarter at $1.01 trillion, and down 4% from a year ago. As a result, for the first time in its history, JP Morgan has twice as many deposits as loans issued. In other words, the loan/deposit ratio is below 50%.

Since the 2008 financial crisis, total deposits have doubled while credit has been in zero growth for 12 years!

This dichotomy between rising deposits and stagnant loans is even more striking at another American financial giant: Bank of America. At the end of Q1 2021, deposits also hit a new all-time high of $1.88 trillion, even as their lending activity continues to decline at an alarming rate. At $911 billion, loans have even fallen back below the level they were at in 2008. That is 12 years of zero growth in lending activity at Bank of America.

A quick look at the results of Citigroup and Wells Fargo shows a similar situation.

Aggregating the data of the 4 major banks mentioned above, we come to the following conclusion: since the financial crisis of 2008, total deposits have doubled while credit has been in zero growth for 12 years! 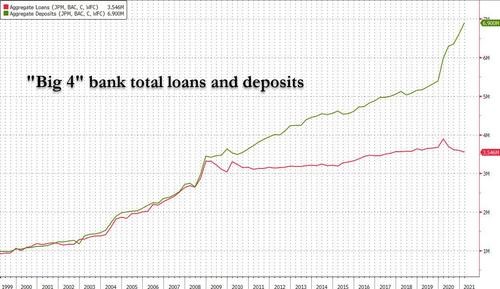 Aggregate deposits and loans of the 4 largest US banks (Source: www.zerohedge.com, Bloomberg)

This astonishing result obviously raises the question of the role played by commercial banks as a monetary "multiplier" in the fractional reserve system. According to this view, credit creation is constrained by the amount of reserves available in the interbank market and the level of reserve requirements. In this system, banks multiply the share of the monetary base available to them when they make loans. In other words, banks receive deposits because they need to extend credit.

The current context is completely different: banks are drowning in deposits (from the US Federal Reserve) but they are not able to lend enough, probably because there is no such demand for credit in the real economy. For conventional monetarists, this is problematic because lending activity should create deposits, not the other way around.

A retrospective study of the credit activity of the four major U.S. banks shows that loans and deposits have moved in tandem for most of their history. But since the Lehman Brothers crisis, the conventional process of creating deposits via loans has definitely broken down. As mentioned above, there is no longer any growth in loans, even though the combined deposits of all US banks have exploded over the period. The result: more than $6 trillion in excess deposits over loans made.

The velocity of the currency in the United States has been in free fall since 2008 and is even threatening to fall below 1x.

What does this amount correspond to? Almost as much as the reserves injected by the US Federal Reserve since the great financial crisis, or 7 trillion dollars to be exact. This is the bitter conclusion that monetarists are now arriving at: the gigantic injections of liquidity are piling up on the assets side of the banks' balance sheets and are not benefiting – or only by a little extent - the credit activity and therefore the real economy. The absence of the aforementioned multiplier effect is certainly the missing link in a genuine recovery in growth since 2008. This perverse effect is visible to the naked eye by observing a graph of the velocity of M2 money.

As a reminder, the velocity of money is the speed at which money passes from hand to hand. A high velocity is a sign of a dynamic economy and vice versa. The velocity of money is calculated, in its simplest form, by dividing GDP by M2, which is cash and time deposits of two years or less and deposits with a notice period of three months or less. This calculation thus reveals the number of times money "turns" in the economy each year. Without velocity of money, GDP shrinks, which means there is no inflation possible. 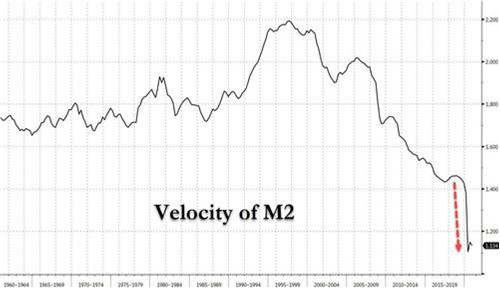 M2 Velocity in the US (Source: www.zerohedge.com, Bloomberg)

The fact that this velocity is falling sharply explains much of the paradigm we have been in since the great financial crisis of 2008 - real GDP growth well below the norm and deflationary risk. Instead of benefiting the real economy, this liquidity is fueling inflation in financial assets, creating a number of bubbles in the equity, bond, real estate, cryptocurrency or art markets - the so-called "everything bubble".

Where can all this lead us?

In a post-pandemic recovery scenario, the Federal Reserve will have to "taper" the "Quantitative Easing" process, which should mechanically reduce deposit growth. Banks should therefore have no choice but to resort to credit in order to compensate for the Fed's slowdown in money creation. To fill the gap between deposits and loans, US banks will have to flood the economy with about $2.5 trillion in loans, or one third of the current credit volume!

If this does not happen, a repeat of the post-Lehman situation is to be feared. While many economists believe that the timid recovery in inflation seen in the first quarter will eventually turn into a much more pronounced acceleration, another scenario could emerge. Indeed, a lack of recovery in credit activity would undo the massive fiscal and monetary stimulus efforts undertaken by government authorities over the past 12 months.

Sadly, the quarterly figures published by the major US banks paint a picture relatively similar to that of the post-Lehman period: deflationary risk in the real economy and inflation in financial assets. Stay tuned!