The middleman of the middlemen: What you need to know about the Marqeta IPO

On May 14th, Marqeta filed for an IPO that could see the fintech firm valued at $10B. But who are they to command such a high price tag?

On May 14th, Marqeta filed for an IPO that could see the fintech firm valued at $10B. But who are they to command such a high price tag? Marqeta leverages proprietary APIs to help other fintech companies launch and operate consumer payment products. This means they facilitate payment processing, a service the firm calls a modern card issuing operation.

Think of an API (application programming interface) as a waiter in a restaurant. A waiter helps you communicate your order to the chef, and then brings you the desired meal once ready. On the web, when you book a flight through a third-party solution, you make use of Expedia’s API. The API communicates your desire to the airline’s database, and then comes back to you with prices to choose from.

When you buy a TV via a buy now pay later firm like Klarna, the Marqeta makes sure your money gets to the merchant’s pocket. This is an instant payment meaning that the transferred cash is instantly available on the recipient’s wallet. Marqeta’s customers are firms like Klarna, DoorDash and Square, which all need API solutions to flexibly design how they charge and reimburse their users.

Companies thus use Marqeta like a money messenger working on their behalf with card networks and issuing banks to issue cards, or authorize transactions or communicate settlement entities. They are the ultimate middleman of middlemen.

Marqeta generates value because it allows merchants to access cards and payment solutions without needing to deal with big banks directly, in exchange for a small fee. Thanks to Marqeta businesses save time and money Just like you would use Expedia’s API to book a flight from Swiss Airlines, Klarna will use Marqeta’s API to book a card from Visa. As shown in the graph below, Marqeta is generating massive processing volume with clear CAGR.

As of March 31, 2020 Marqeta had issued some 320 million cards and processed over 1.6 billion transactions. Because Marqeta makes money by charging small fees (see below) it is in their interest to make its APIs as open and accessible as possible to developers. Enticing companies to build new products around their API will be a major business development objective and be the source of more TPV:

Square is infamous for charging some of the largest fees in the game, mainly because of their market power—something that could become squeezed if they lose their grip over market share once other incumbents make their entrance. 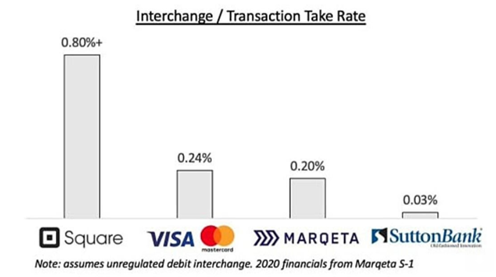 Marqeta’s financial success relies on its partner’s success. Square is Marqeta’s biggest partner, and it is growing quickly. Square’s growth thesis is a big reason behind Marqeta’s potential on the markets and why they posted 103% revenue growth last year.

2020 saw revenues reach $290M versus $143M in 2019. With the pandemic soon behind us, transactional volumes could grow further both as consumers continue online shopping, and as they begin spending in stores, and eating at restaurants again. In the first three months of 2021, Marqeta generated about $108M, up 123% from the same time in 2020.

Like most growth companies, Marqeta is incurring losses and remains unprofitable today. Gross margins are quite reasonable, at around 40% in the last two years. The higher the gross margin, the more capital a firm retains on each buck of sales. It is money it can use to pay down debt and other costs.

On the other hand, operating expenses are putting the firm below. Marqeta lost $47.7M in 2020, but this was an improvement from the year prior. In the first three months of 2021, they lost $12.8M. Net loss margins on total processing volumes fell from 40% to 16% in 2020, but have risen back up to 30% this year. The largest driver behind the operating costs is an unusually high compensation and benefits figure of $126,861,000.

What could go South?

There are three risk factors that stand out from the S-1 filing: an overreliance on a limited set of customers, market entry competition, and cybersecurity threats.

Marqeta relies heavily on Square and Sutton Bank to run their business. This is not uncommon however, as we have seen with Affirm’s heavy reliance on Peloton. Highly correlated businesses, go up together and but also down together. In 2020, Square made up 70% of Marqeta’s net revenue and year to date, 73%. Talk about reliance. This gives Square a lot of power over Marqueta. Furthermore, Sutton Bank is the main bank that works with Marqueta representing 94% of the business. The main solution to this, will be to partner with more players. Problem here however is that Square or Sutton Bank could see this as disloyalty and back out of future deals (a threat). Stay tuned on news regarding new partners.

Marqeta is tackling a massive market if we are talking in total processing volume we are counting in trillions. Marqeta is a sort of intermediary to powerful institutions, such as JP Morgan, Goldman Sachs, Visa and Mastercard. These firms work with Marqeta because of its API – the company thus represents a middleman and could be cut out down the line. What could happen is Marqeta gets bought just like SoFi did with Galileo, Lending Club with Radius Bank and Visa’s failed attempt at buying API heavyweight Plaid. Lastly, the crypto space and DeFi’s vision to cut out centralized web 2.0 players could become an issue.

Being a payment processor also means the firm faces cyber attacks from state-backed agencies or individual hackers. Any major hacks in cybersecurity measures could become an expensive problem.